Once again we apologise if this has caused any one any problems. God Bless and keep you.

Posted by The Latter Day Church of Jesus Christ at 9:46 am No comments: 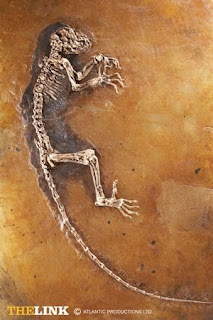 Today the BBC and the its love child David Attenborough have in conjunction with the believers of evolution and Darwin broken the story of ‘Ida’ the supposed Missing Link, the connection that supposedly links us with the animal kingdom. As a believer in God and a firm and unwavering believer in the biblical creation I thought that it would be appropriate to find a believer’s answer to this ‘Missing Link’. It is with great pleasure that I am able to post this reply from the http://www.answersingenesis.org/ web site. This wonderful website is a great resource for all those that believe in the biblical creation and the events of Genesis. I believe that although we have many differences with organized Christianity that this belief binds us together and gives a true unwavering scientific approach to the creation. Please read and do not be duped in to thinking that everything you read or see on the BBC or TV is actual proof of anything, try and open up your mind and examine what you are told about this supposed ‘Missing Link’

FROM http://www.answersingenesis.org/
For all the headlines and proclamations, this “missing link” story includes an amazing amount of hot air.
A story we first previewed on May 16 has since rocketed to the heights of media hype as a team of scientists reveals “Ida,” the latest and greatest supposed missing link. But does Ida actually support “the evolution of early primates, and, ultimately, modern human beings,” as one news outlet reported?

Another reporter raved, “The search for a direct connection between humans and the rest of the animal kingdom has taken 200 years—but it was presented to the world today at a special news conference in New York.”

Formally identified as Darwinus masillae (in honor of Charles Darwin), the fossil originated in Germany and is purportedly 47 million years old. One scientist gave the find the nickname Ida (after his daughter).

Despite the hype, Ida looks nothing like a transitional “apeman,” instead looking quite like a modern lemur.

As for a more level-headed explanation of the evolutionary excitement, the Wall Street Journal reports:
Anthropologists have long believed that humans evolved from ancient ape-like ancestors. Some 50 million years ago, two ape-like groups walked the Earth. One is known as the tarsidae, a precursor of the tarsier, a tiny, large-eyed creature that lives in Asia. Another group is known as the adapidae, a precursor of today's lemurs in Madagascar.

Based on previously limited fossil evidence, one big debate had been whether the tarsidae or adapidae group gave rise to monkeys, apes, and humans. The latest discovery bolsters the less common position that our ancient ape-like ancestor was an adapid, the believed precursor of lemurs.

Thus, rather than an apeman-like missing link that some media sources have irresponsibly implied, the real story is quite underwhelming and should in no way faze creationists. Let’s first review the facts:

Given these facts, it may seem incredible that anyone would hail this find as a “missing link.” Yet British naturalist David Attenborough claims:
“Now people can say, ‘Okay, you say we’re primates . . . show us the link.’ The link, they would have said until now, is missing. Well, it is no longer missing.”
Unbelievably, Attenborough claims his interpretation is “not a question of imagination.”

The Creationist Interpretation
The principles that inform creationists about Ida are some of the same that allow creationists to interpret fossil after fossil hailed as “transitional forms”:


So it’s clear what Ida is not. As for our conclusion on what Ida is, we wrote in News to Note:
Because the fossil is similar to a modern lemur (a small, tailed, tree-climbing primate), it’s unlikely that creationists need any interpretation of the “missing link” other than that it was a small, tailed, probably tree-climbing, and now extinct primate—from a kind created on Day 6 of Creation Week.

Much of the excitement over Ida appears to stem from a well-coordinated public relations effort to promote an upcoming documentary and a new book titled The Link. The documentary will air on the History Channel in the U.S. (as The Link) on May 25 at 9 p.m. ET/PT. It will air on BBC One in the UK (as Uncovering Our Earliest Ancestor: The Link) on Tuesday May 26th at 9 p.m. Filmmaker Atlantic Productions even launched a website to promote the discovery, revealingthelink.com.

Yet as Hurum commented, “This fossil will probably be pictured in all the textbooks for the next 100 years.” So while the media rush may at first be a bid to promote the documentary and book, the ultimate result is one more trumped-up “missing link” presented to future generations as evidence of evolution.

The Real Story of this “Scientific Breakthrough”
While Ida has hit the mainstream media—and will even be featured on Good Morning America Wednesday—what is the real story? Has Ida been exposed to good scientific review? To the contrary, the Guardian reports:

Jørn Hurum, at the University of Oslo, the scientist who assembled the international team of researchers to study Ida is relaxed about using the phrase “missing link” to describe Ida. “Why not? I think we could use that phrase for this kind of specimen,” he said. “People have a feeling that if something is important it is a missing link.”

In the paper published in PLoS ONE from the Public Library of Science on the fossil the author is more circumspect. “Darwinius masillae is important in being exceptionally well-preserved and providing a much more complete understanding of the paleobiology of an Eocene primate than was available in the past,” the authors wrote.

“The species could represent a stem group from which later anthropoid primates evolved the line leading to humans, but we are not advocating this here.”

The paper’s scientific reviewers asked that they tone down their original claims that the fossil was on the human evolutionary line.

One of those reviewers, Professor John Fleagle at Stony Brook University in New York state said that would be a judgment for the scientific community. “That will be sorted out or at least debated extensively in the coming years once the paper is published,” he said. (Emphases added)
So despite the treatment most media reports are giving Ida, the research team behind Ida was asked to remove their speculation from their peer-reviewed paper! Even so, the Guardian also reports, “There is even talk of Ida being the first non-living thing to feature on the front cover of People magazine.” Indeed, it seems that the pitch of Ida as the missing link is full-out sensationalism by people who are bypassing the scientific community with a direct-to-the-public appeal on behalf of Darwinism.

Meanwhile, the New York Times has reported:
Despite a television teaser campaign with the slogan “This changes everything” and comparisons to the moon landing and the Kennedy assassination, the significance of this discovery may not be known for years. An article to be published on Tuesday in PLoS ONE, a scientific journal, will report more prosaically that the scientists involved said the fossil could be a “stem group” that was a precursor to higher primates, with the caveat, “but we are not advocating this.”

All of this seems a departure from the normal turn of events, where researchers study their subject and publish their findings, and let the media chips fall where they may.
Posted by The Latter Day Church of Jesus Christ at 10:06 am No comments:

The Latter Day Church of Jesus Christ will be holding their annual Spring General Assembly on the 24th of May this coming Sunday. The proceedings will be videoed and will be available for all to see on the churches blog site via YouTube. We welcome all who wish to attend to do so and to call ahead to confirm with us that they will be attending. Once again we wish to encourage all those that can not be their in person to watch the Spring General Assembly on the videos that will be posted on the Blog site.

For all those that subscribe to the churches newsletter The Times & Seasons Mays edition will be a special General Assembly issue so this will be dispatched to you the week commencing the 25th of May.

Work is still progressing nicely on the numerous projects that the church has undertaken. The Churches official 1835 Edition of the Doctrine & Covenants is still due to be completed by the end of the year along with the children’s version of the Book of Jeraneck. If you are interested in purchasing any of these please contact the church by email
Posted by The Latter Day Church of Jesus Christ at 2:39 pm No comments: