OUT OF THE MOUTHS OF BABES

Out of the mouths of babes, that is the headline today, why? Well yesterday while reading the newspaper I came across this wonderful article about a young boy of three from Germany who has said that he saw heaven and his dead Grandmother. After reading the article and the views of the doctors in the article I said to my self that the lord was right, we need to be listening to our children to suffer them to come unto us, their insight and wisdom could serve us all well.

I’m sure there will be those reading this blog who will think that they can explain away this boys experience, but I think that instead of trying to explain away what to me seems like very real proof of heaven may be we should just except it and move on, maybe if we embraced God in our lives and a belief in heaven we would all be a lot better placed to come through the crisis on our lives. Well I’ll let you read it for yourselves and let you ask the Lord for a witness, may be you need one? Maybe you don’t whatever your thoughts and beliefs this is a great article.

Boy, 3, tells how he 'saw grandmother in Heaven' before being brought back from the dead after falling into pond

A boy of three claims he saw his great grandmother in heaven while he was clinically dead after falling into a pond.
Paul Eicke came back to life more than three hours after his heart stopped beating.
It is believed he was in the pond at his grandparents' house for several minutes before his grandfather saw him and pulled him out.
His father gave him heart massage and mouth-to-mouth during the ten minutes it took a helicopter to arrive.
Paramedics then took over and Paul was taken the ten-minute journey to hospital. Doctors tried to resuscitate him for hours. They had just given up when,
three hours and 18 minutes after he was brought in, Paul's heart started beating independently.
Professor Lothar Schweigerer, director of the Helios Clinic where Paul was taken, said: 'I have never experienced anything like it.
'When children have been underwater for a few minutes they mostly don't make it. This is a most extraordinary case.'
The boy said that while unconscious he saw his great grandmother Emmi, who had turned him back from a gate and urged him to go back to his parents.
Paul said: 'There was a lot of light and I was floating. I came to a gate and I saw Grandma Emmi on the other side.
'She said to me, "What are you doing here Paul? You must go back to mummy and daddy. I will wait for you here."
'I knew I was in heaven. But grandma said I had to come home. She said that I should go back very quickly.
'Heaven looked nice. But I am glad I am back with mummy and daddy now.'
Paul is now back at home in Lychen, north of Berlin in Germany, and there appears to be no sign of brain damage. Statistics from America show the majority of children who survive drownings - 92 per cent - are discovered within two minutes following submersion.
Nearly all who require cardiopulmonary resuscitation die or are left with severe brain injury.
But the water in the pond was very cold and the boy's core temperature was just 28c, compared to the normal of 37c.
Cold temperatures slow the metabolism-which means the body can survive for longer without oxygen. If the temperature had been higher, the team would have stopped trying to resuscitate after 40 minutes because the boy would definitely have been brain dead.
Instead, they carried on with the chest compressions to stimulate Paul's organs, which had shut down after he breathed in the cold water.
Professor Schweigerer went on: 'My doctors were close to saying "we can do no more" after two hours of thorax compression.
'This was because the chances of survival had gone and the little lad must have been brain dead.
'But then suddenly his heart started to beat again ... it was a fantastic miracle.
'I've been doing this job for 30 years and have never seen anything like this. It goes to show the human body is a very resilient organism and you should never give up.'

Posted by The Latter Day Church of Jesus Christ at 5:36 pm No comments: 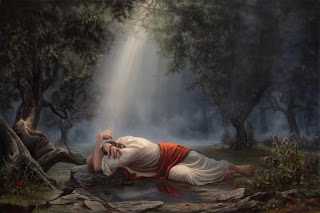 Easter is a wonderful time of year for all who believe in Christ, but for the members of the Latter Day Church of Jesus Christ it holds a special place in our hearts. As members of the church we have been commanded not to partake in the worldly rituals that so often surround us when Easter burst forth upon us, rather we have bee reminded by the Lord in revelation that we are to remember him and the sacrifice that was given so that we might live. This sacrifice has often been seen the crucifixion and that is all and nothing is given to the work done in the Garden of Gethsemane. As members of the church we believe that all of the work of atonement was undertaken in the Garden of Gethsemane. Christ's agony in the garden so unfathomable to the finite mind, both as to intensity and cause. The thought that He suffered through fear of death is untenable. Death to Him was preliminary to resurrection and triumphal return to the Father from whom He had come, and to a state of glory even beyond what He had before possessed; and, moreover, it was within His power to lay down His life voluntarily. He struggled and groaned under a burden such as no other being who has lived on earth might even conceive as possible. It was not physical pain, nor mental anguish alone, that caused Him to suffer such torture as to produce an extrusion of blood from every pore; but a spiritual agony of soul such as only God was capable of experiencing. No other man, however great his powers of physical or mental endurance could have suffered so; for his human organism would have succumbed, and syncope would have produced unconsciousness and welcome oblivion. In that hour of anguish Christ met and overcame all the horrors that Satan, "the prince of this world" could inflict. The frightful struggle incident to the temptations immediately following the Lord's baptism was surpassed and overshadowed by this supreme contest with the powers of evil. 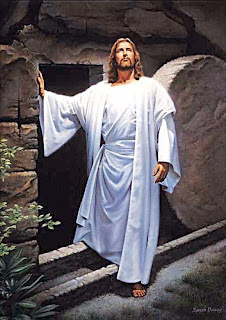 In some manner, actual and terribly real though to man incomprehensible, the Saviour took upon Himself the burden of the sins of mankind from Adam to the end of the world. Modern revelation assists us to a partial understanding of the awful experience. In March 1830, the glorified Lord, Jesus Christ, thus spake: "For behold, I, God, have suffered these things for all, that they might not suffer if they would repent, but if they would not repent, they must suffer even as I, which suffering caused myself, even God, the greatest of all, to tremble because of pain, and to bleed at every pore, and to suffer both body and spirit:
And would that I might not drink the bitter cup and shrink-- nevertheless, glory be to the Father, and I partook and finished my preparations unto the children of men."

From the terrible conflict in Gethsemane, Christ emerged a victor. Though in the dark tribulation of that fearful hour He had pleaded that the bitter cup be removed from His lips, the request, however oft repeated, was always conditional; the accomplishment of the Father's
will was never lost sight of as the object of the Son's supreme desire. The further tragedy of the night, and the cruel inflictions that awaited Him on the morrow, to culminate in the frightful tortures of the cross, could not exceed the bitter anguish through which He had successfully passed.

To this end was he born to take upon himself the sins of the whole world form the beginning of time to the end, to call upon the courts of justice to answer the call for all mankind so that they might have the gift of salvation. This is the real gift of Easter, not the eggs or bunnies or chicks but rather the gift of salvation and deliverance from sin. So at this wonderful time we give thanks to the Lord for his willingness to suffer for our sake. Happy Easter.

Ref: Jesus The Christ (Talmage)
Posted by The Latter Day Church of Jesus Christ at 6:05 pm No comments: