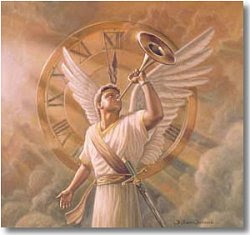 The Latter Day Church of Jesus Christ would like to announce that from today we are starting a charity drive with immediate effect. The church will operate this charity drive via our Charity partner Latter Day Charity Relief. Many of our new members who have joined the church had raised the issue of raising money for those members in far of countries and in our own who are in need. In a meeting held two nights ago it was decided that a church that runs under a mandate from God can ill afford to ignore the needs of our fellow brothers and sisters no matter where they are in the world.
After speaking to the Charities Commission here in the United Kingdom sometime ago and after taking their advice we decided to enact the churches charitable status and have decided to place on our church blog site our Small Charity Constitution for all to see and also a copy of the Charities Commission guideline on small charities who earn less than £5000 a year.

It is our aim from today to ask and to solicit from people items of used clothing, shoes, and bags so that we may be able to supply to the needy the items that they do not have or are in need of. We will also try to exchange some items of clothing for money and set this aside for the charity so that we may be able to use a portion of this money to help enrich the lives of those less fortunate than we and to ease their Burden.

As Mormons and as Christians we believe that charity is the pure love of Christ. We teach that when we serve others, we are also serving God, and we turn to the example of the Savior in deciding how to serve others. The Lord said “Thou shalt love the Lord thy God with all thy heart, and with all thy soul, and with all thy mind. This is the first and great commandment. And the second is like unto it, Thou shalt love thy neighbour as thyself. On these two commandments hang all the law and the prophets.” In the eyes of our Savior, love and charity were identical. All of His acts of charity were done not from a sense of duty, but from a deep feeling of love for everyone that He encountered. He didn’t limit His service to His friends, He didn’t limit it to those who were wealthy or middle class. He didn’t even limit it to those who were worthy, in the world’s eyes, of charity. Jesus Christ demonstrated charity constantly and encouraged His followers to do the same.

Christ’s life is the ultimate example of charity. Through His example, we can find happiness and enrich the lives of others. Christ shows us that if we put others first, we can find true joy. The definition of charity is the pure love of Christ. Charity is one of the many gifts from Christ. It should be sought with prayer and diligence:
'Wherefore, my beloved brethren, if ye have not charity, ye are nothing, for charity never faileth. Wherefore, cleave unto charity, which is the greatest of all, for all things must fail—'

We are asking for you to show charity to those less fortunate. It is or aim to collect as much as we can and give it as a charitable donation to those who stand in need of it.
Please find below the criteria to which The Latter Day Church of Jesus Christ as a charity adhere to. The following is taken from the Charities Commission website http://www.http//www.charitycommission.gov.uk/Start_up_a_charity/Do_I_need_to_register/Types_of_charity_index.aspx#1

We don't register charities whose income is less than £5,000. This helps to avoid unnecessary administrative costs and effort for smaller charities and for us. Small charities don't need to register to prove that they are charities or benefit from charitable status.
Now that you have read the above please find below The Latter Day Church of Jesus Christ Charity Charter:
SMALL CHARITY CONSTITUTION
Suitable for small charities with an annual income under £5,000 that don’t own a building or employ people and do not intend to register with the Charity Commission.
1 NAME
The Latter Day Church of Jesus Christ
2 THE PURPOSES OF THE CHARITY ARE:-
To promote Christian Values around the world and Promote Christian Literature and Try and relieve poverty and suffering were we see it around the world, giving to those who stand in need here in the United Kingdom, Haiti and Africa. This endeavour will be carried out via our Charity partner Latter Day Charity Relief.

4 CARRYING OUT THE PURPOSES
In order to carry out the charitable purposes, the trustees have the power to:
(1) raise funds, receive grants and donations
(2) apply funds to carry out the work of the charity
(3) co-operate with and support other charities with similar purposes
(4) do anything which is lawful and necessary to achieve the purposes

5 MEMBERSHIP
The charity shall have a membership. People who support the work of the charity and are aged 18 or over, can apply to the trustees to become a member. Once accepted by the trustees, membership lasts for 3 years and may be renewed. The trustees will keep an up-to-date membership list.

The trustees may remove a person’s membership if they believe it is in the best interests of the charity. The member has the right to be heard by the trustees before the decision is made and can be accompanied by a friend.

6 ANNUAL GENERAL MEETING - AGM
(1) The AGM must be held every year, with 14 days notice given to all members telling
them what is on the agenda. Minutes must be kept of the AGM.
(2) There must be at least 3 minimum members present at the AGM.
(3) Every member has one vote.
(4) The trustees shall present the annual report and accounts.
(5) Any member may stand for election as a trustee.
(6) Members shall elect between 3 and 10 trustees to serve for the next year. They will retire at the next AGM but may stand for re-election.

7 TRUSTEE MEETINGS
(1) Trustees must hold at least 3 meetings each year. At their first meeting after the AGM they will elect a chair, treasurer and secretary. Trustees may act by majority decision.
(2) At least 3 trustees must be present at the meeting to be able to take decisions. Minutes shall be kept for every meeting.
(3) If trustees have a conflict of interest they must declare it and leave the meeting while this matter is being discussed or decided.
(4) During the year, the trustees may appoint up to 2 additional trustees. They will stand down at the next AGM.
(5) The trustees may make reasonable additional rules to help run the charity. These rules must not conflict with this constitution or the law.

8 MONEY AND PROPERTY
(1) Money and property must only be used for the charity’s purposes.
(2) Trustees must keep accounts. The most recent annual accounts can be seen by anybody on request.
(3) Trustees cannot receive any money or property from the charity, except to refund reasonable out of pocket expenses.
(4) Money must be held in the charity’s bank account. All cheques must be signed by 2 trustees.

9 GENERAL MEETINGS
If the Trustees consider it is necessary to change the constitution, or wind up the charity, they must call a General Meeting so that the membership can make the decision. Trustees must also call a General Meeting if they receive a written request from the majority of members. All members must be given 14 days notice and told the reason for the meeting. All decisions require a two thirds majority. Minutes must be kept.
(1) Winding up - any money or property remaining after payment of debts must be given to a charity with similar purposes to this one.
(2) Changes to the Constitution - can be made at AGMs or General Meetings. No change can be made that would make the organisation no longer a charity.
(3) General Meeting - called on written request from a majority of members.
(4) Trustees may also call a General Meeting to consult the membership

10 SETTING UP THE CHARITY
This constitution was adopted on the 10th August 2009 by the people whose names appear below. They are the first members of the charity and will be the trustees until the AGM, which must be held within one year of this date.
Print name and address
Matthew Gill 55 Sherbourne Drive, Hilton, Derbyshire
DE65 5NJ
Philip Gill 55 Sherbourne Drive, Hilton, Derbyshire
DE65 5NJ
Posted by The Latter Day Church of Jesus Christ at 11:37 am No comments: