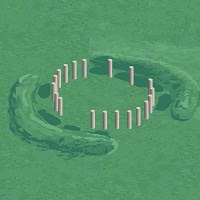 Dear Brothers and Sisters it has been reported today through the Internet news channels that Archaeologists studying the land surrounding Stonehenge have discovered the remains of another ceremonial monument a few hundred yards away. It is wonderful news for the church as we believe that this once again stands as material evidence of the validity of the Book of Jeraneck. Please read the article below and then take the time to read the Book of Jeraneck which can be found to download on the church website http://www.ldchurchofjesuschrist.org/.

Archaeologists studying the land surrounding Stonehenge have discovered the remains of another ceremonial monument a few hundred yards away.
The second henge - a circular ditch thought to have held a free-standing wooden structure - was uncovered just two weeks into a three-year project to map the area around the World Heritage Site.
Leaders of the international project, involving experts from British universities and teams from Austria, Germany, Norway and Sweden, hailed the discovery of Stonehenge's lost "twin" as incredible.
Professor Vince Gaffney, from the University of Birmingham, said: "It will completely change the way we think about the landscape around Stonehenge.
"People have tended to think that as Stonehenge reached its peak, it was the paramount monument, existing in splendid isolation.
"This discovery is completely new and extremely important in how we understand Stonehenge and its landscape."
The new "henge-like" late Neolithic structure would have stood within sight of Stonehenge and appears to have been built on the same orientation as the world-renowned monument.
It comprises a segmented ditch with entrances to the north east and south west, which are associated with internal pits up to three feet in diameter.
The international study forms part of the Stonehenge Hidden Landscapes Project and was led by the University of Birmingham and the Austria-based Ludwig Boltzmann Institute.
The project aims to map 5.5 square miles of the terrain around Stonehenge, in Wiltshire, using the latest geophysical imaging techniques.
Posted by The Latter Day Church of Jesus Christ at 4:15 pm No comments: